I suppose it is time for a blog post (New Year Meme).

Some of you already know this - I have been back for a while now. 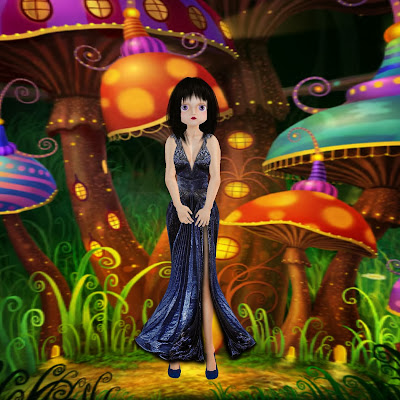 I spend these days as a chacha doll in SL. The big head is quite an apt expression for how mine may explode from all the sensory adjustments of being back. It's a long story, but I won't complain because there is no way I would trade this after-effect for every single experience I have had while I was away.

Including that time the drunk guy shoved his way into my room in a guesthouse up a quiet town up a mountain and got thrown out by the, erm, special person in my life, who is now my favourite action hero.

And that time when FLYING COCKROACHES tried to steal my bananas.

And that time the tiny baby spider killed my pet cockroach in the bathroom.

And those times the earthworms slimed their way out of the water pipes in my bathroom. One by one.

And that time that HUGE spider jumped on me because I switched on the stove suddenly, almost accidentally turning it into cooking fuel.

Anyway, I would totally tell you every single detail in my own way.

Except that Strawberry's New Year Meme is so thankfully relevant for a summary.

1. How did you spend New Year's Eve?
I spent it in SL. Really. With Debbie and Redice and several Asians who have no lifeno wish to go out into the crowd.

2. Did you keep any new years' resolutions?
I don't make resolutions because I find that I can't stay focused on a list of many and sometimes vague wishes. Instead I make action plans and execute them when the factors come together. So yes, I did something in 2013 that I had planned for more than a year. I left home and lived in India and then Nepal for almost 7 months. I had originally planned to do this for a full year in 2016, but I was feeling restless in 2011 and a friend pointed out that I have no reason to wait blindly till 2016. I had money for 6 months and 2013 felt like the year that everything would turn out to my favour.

3. What was your biggest achievement(s) of the year?
I lived in India for 4 months and Nepal for 2.5 months. I did spiritual retreats, ate like a caveman, slept like a log, did a little teaching and laughed over everything and nothing.

4. What was the best thing you bought?
My air ticket?

7. What was your favorite movie you watched this year?
I can't even remember the last movie I watched. I remember wanting to watch Thor when I was in Nepal though. The ticket price of less than USD$3 was very tempting but it would be 3 hours before the next screening. I wanted to watch Frozen after I came back but tickets were sold out the moment it was my turn at the counter. My luck. So yeah, I have not watched a movie for more than 8 months now.

9. Tell us a valuable life lesson you learned.
If you really want to do something (that is not hurtful), don't let fear hold you back. You'll be surprised at how much better life gets when you refuse to let fear get in the way.

Sounds like you had an incredibly adventurous 2013, must have been such a learning experience as well. I'm quite envious actually. Hope I get to do similar one day. All the best for 2014! <3