I give up on myself.

This is what my home looks like for now. 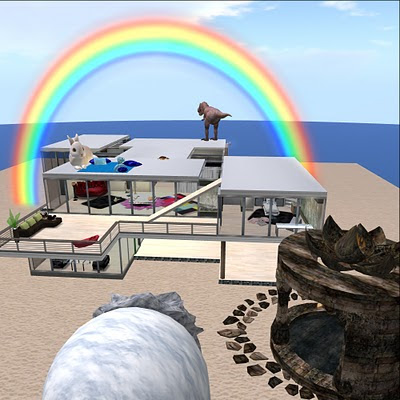 I merged 2 houses, re-textured the wood and it looked great.

If you overlook my photography. And... the decor. I'll admit it's kind of messy.

But the point is, I have a really cool house despite my maybe-perhaps-but-who-really-cares less than sophisticated decor. And I still love it after using this same house for more than 6 months. (Yep Samanthe, I'm rubbing it in. Again. :p)

So when I started to explore further into building, I was inspired to make something just as cool. 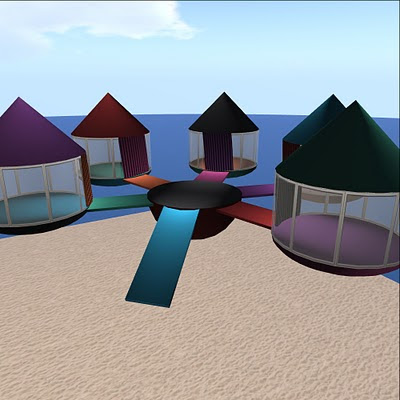 Posted by Tashi Core
at 12:23 No comments: Links to this post

I just about passed out.

I don't know what to say. 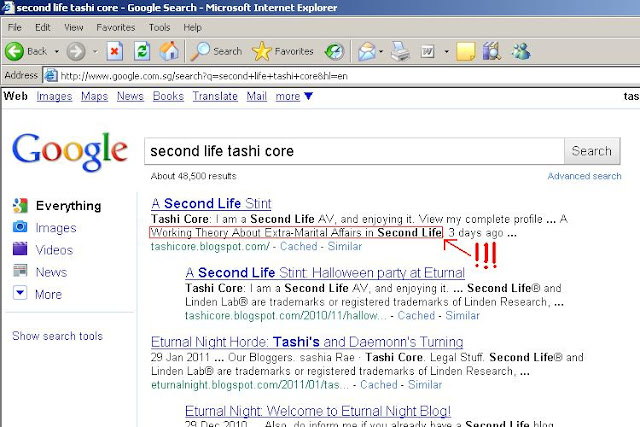 I mean, when the hell did my blog become a Working Theory About Extra-Marital Affairs in SL?!

Posted by Tashi Core
at 19:38 No comments: Links to this post

Email ThisBlogThis!Share to TwitterShare to FacebookShare to Pinterest
Tags: Links

I came unprepared and I am going to just post whatever pops into my mind.

My SL for the past week was pretty quiet except for a couple of good laughs. One of them was a frenzy that happened last night when we brought in 3 new members into our Eturnal Night family all at the same time, in the same place. Just before sleepy-me was about to crash.

Gotta admire Sashia, I don't know how she did it, juggling that messy situation so well. Not only did she manage everything with great presence of mind, she saved me from learning French. (Oh, I don't mind learning French, it's just not exactly possible within 2 minutes.) Long story, really. :p

Welcome to Eturnal Night, and our confused blogger hopes you enjoy our family as much as I do.

It was a good time for sorting inventory. I mean when it was quiet, not last night. I have gone back down to 9+k. :D

My writing is so messed up today that maybe I should just shut up.

*note to self - Figuring out the google translator goes on my to-do list.

Posted by Tashi Core
at 10:56 No comments: Links to this post

Today is the last day of the Chinese New Year, which is also the Chinese Valentine's day. I am having a date with my best bud R after work, but we didn't realise what the day is when we planned it. :)

Yes, R is single. And very available. And prettier than me. No joke. Any interested guys? :D We are trying so hard to "market" her but she's shy. :p

I work in an all-female dept, so one would think that it gets all girly and romantic in here for our cultural Valentine's day.

But it seems my girls prefer lottery. :p

R: How about colouring it in red?

* "Huat" is Hokkien (a Chinese dialect) for getting rich.
* "Need to like that or not" is the Singlish way of saying "Are you sure you/we want to be like that?"
* Red is the standard auspicious colour in the Chinese culture.
* The lottery we are buying is called "Toto". "System 7" is a erm, system of 7 sets of numbers. Nope, I am not telling you what numbers we are buying. I am superstitious. :p

Posted by Tashi Core
at 14:30 No comments: Links to this post

I usually like to keep personal things private, but that does not mean that I do not talk about my personal life at all. I am sooo going to talk about my v-day.

Because I am sooo damn pissed.

On v-day's eve, I meant to crash early because I had to juggle a shitload of delayed tasks and a full-day meeting at work on v-day itself. I was cheerfully resigned to the fact that my special someone is not in Singapore and actually feeling quite relieved because it helped that I did not need to put in a date for the day's activities. (And my special someone is sweet to me all year round, I don't really miss him for v-day. :p)

Coming 11+pm, there was shouting in my brother's room. My brother and his gf fight all the time, so I wasn't too concerned. At least not till they brought their fight out into the family room, waking up my parents and then tried to pull everyone into their fight (to take sides!). Yes, very mature. We are looking at 2 adults who are both in their 30s.

My mum and I had to take turns to referee each party separately. My dad sat between both groups, holding onto the dog who was forever trying but failing to get the gf's affection because she was afraid of animals.

I managed to persuade my brother to cool off before he spoke to her again, and thankfully he came up with a brilliant idea to do that outdoors. So he went, and she joined him when she calmed down enough. The saga ended at about 1am, but we were all too hyped-up to go to sleep by then.

My mum was upset, so my dog turned his affection to her. It made me feel like shouting at that couple. "Look! A dog is more considerate than you!!"

So anyway, we were all unable to sleep that night. My mum is a typical worrier mum, and she spent the night worrying her head off. The brother and the gf came back and went off. That was like, 3am? They were cool but they did not make up till later.

Because I could not sleep, I acquired a headache for the day and had to take a half-day off from work. When I was dozing, my mum snuck out to the gf's home to peep around to make sure that my brother was there and did not go off on his own to get drunk or do anything silly. Because he was "known" for that sort of thing. And she did not tell me about it until she came back. She knew I would not have approved.

I had to go to work and could not be bothered with that couple anymore. So guess what?

THEY spent theirs eating a nice v-day dinner in a cute restaurant full of pink balloons, took a photo of the gf holding a silly balloon and posted the pic on his fb.

I actually missed it.

:( RL has a way of keeping me away from the most important things in SL.

But I was so glad when Sashia suggested that I check out the place anyway. Because OMG I LOVE IT. 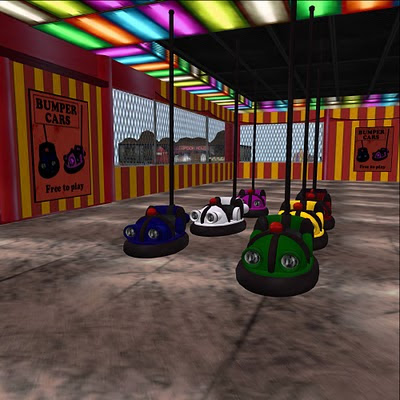 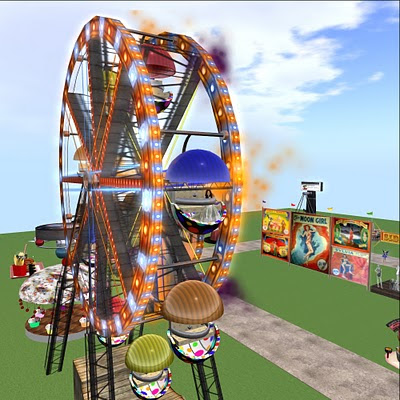 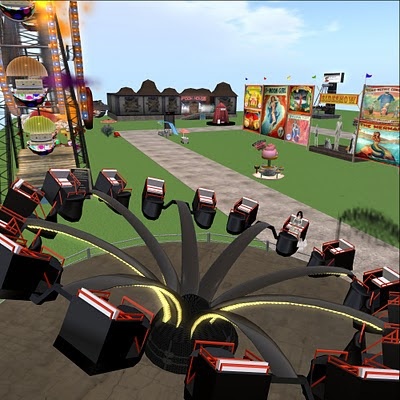 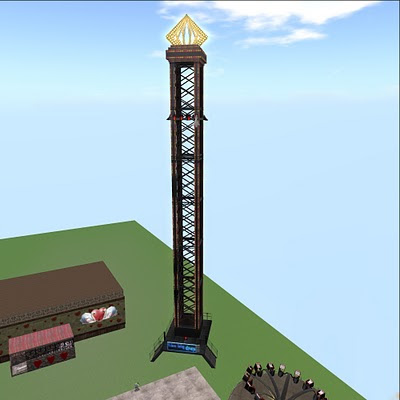 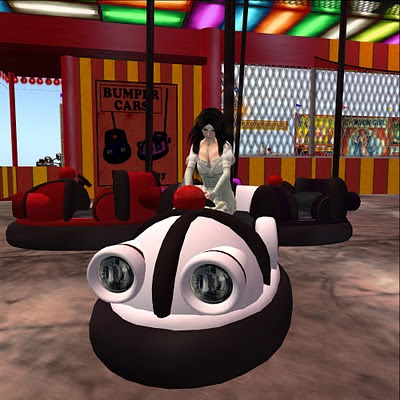 Did I mention that I love bumper cars? I.LOVE.BUMPER.CARS.

Posted by Tashi Core
at 14:04 No comments: Links to this post 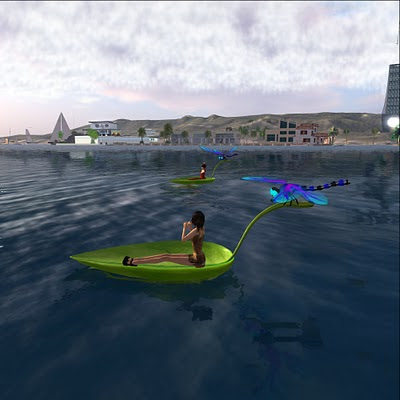 Posted by Tashi Core
at 10:52 No comments: Links to this post

The Importance of Proper English

Robert: so, what are you ladies up to today
Me: i have nothing on :)
Me: my day is about to end and i am chilling before i crash
Me: how about you?
Robert: i'm fully clothed

Posted by Tashi Core
at 09:16 No comments: Links to this post

Email ThisBlogThis!Share to TwitterShare to FacebookShare to Pinterest
Tags: Conversations 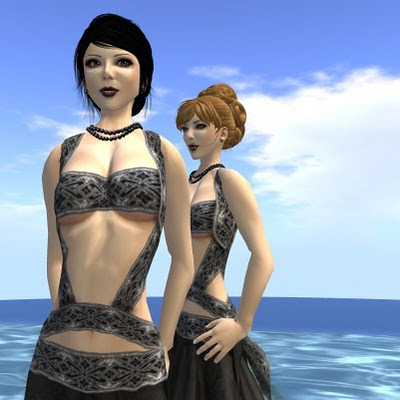 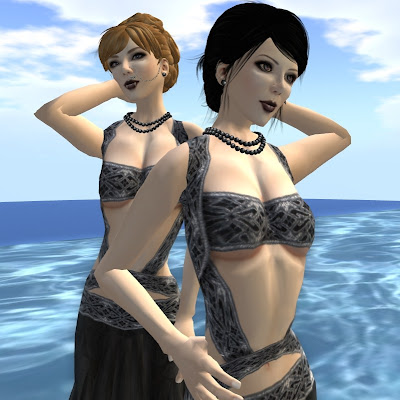 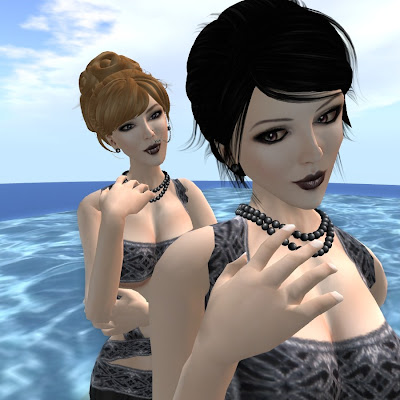 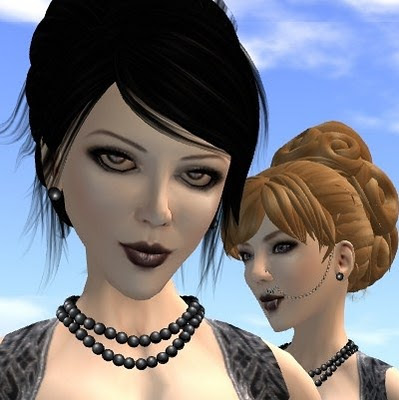 Posted by Tashi Core
at 14:48 No comments: Links to this post

It probably doesn't concern anyone who bothers to read this blog.

I was born with a very bad temper. I put in a lot of effort to curb it. I learned humour. I learned patience. And I learned that although a good amount of wrath is sometimes needed to put things into place, I don't have to be angry when I deliver it. In fact, the ironic thing about anger is that letting it get into me actually makes me inefficient in delivering it effectively.

And how does all these apply to SL?

Well, you know who you are. But oh dear, maybe you are thick enough to not know? :p

I do have better things to do with my time, like spending it with better people or being a friendless bitch. Accept the truth and go get yourself some manners instead. Throw in some EQ if you can manage. And then brains. It helps.

Oh, linking it back to my bad-temper philosophy, I am not angry with you. I promise. Only slightly irritated. But you can try me again if you dare. :)

And yes, I am officially and publicly taunting you.

*hits the publish button and rofl*

Sometimes my humour makes no sense. :/

Posted by Tashi Core
at 10:23 No comments: Links to this post